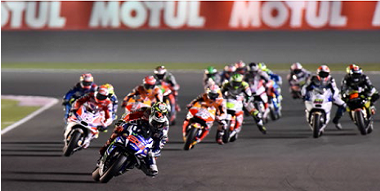 Michelin ready for the Arabian nights in Qatar

Michelin has completed all its pre-season testing and now the French tyre manufacturer is on the way to Losail in Qatar for the first round of the 2017 MotoGP™ World Championship.

Following three successful official winter tests, the company has a clear direction for the new profile front
MICHELIN Power Slick tyre and will be using this version in competitive action for the first time at Qatar this coming weekend. The tyre made its debut in prototype form at Valencia during the final race of last season, and now following minor modifications during the winter and pre-season testing the latest evolution of Michelin’s Grand Prix racing tyre will now it will make its racing entrance at Losail. An updated rear tyre will also be available, again using data gathered from testing and feedback from the 23-strong MotoGP field. Designed to give more traction and drivability it has been tested extensively with impressive results. A change to the rules of the championship will see Michelin bring three versions of front and rear slick tyre to each race. These will be designated as soft, medium and hard and will be identified by the following coloured bands, white, no band and yellow respectively. All rear tyre variants for this event will feature an asymmetric design with a harder right-hand-side designed to combat Losail’s abrasive surface.

Qatar is situated on the Arabian Gulf and its terrain consists of arid desert, beaches and sand dunes. With such a dry climate, wet weather is very unlikely, but for the first-time MICHELIN Power Rain tyres will be available in case of any precipitation. Following a recent test at the circuit by the Dorna and FIM safety team, it has been agreed that if it rains during practice, the riders should try the conditions. Their opinions will then be considered by the Safety Commission before deciding if it is possible to modify the protocol which currently states that there will be no track use in wet conditions. If it rains on race-day, then extra practice will be scheduled to determine if the race can proceed or be postponed to the following day - as happened in 2009 when heavy rain fell over the 5,380m circuit just as the race was about to start and it was delayed until the next day - again any decision will be with the full consultation of the Safety Commission. With this new instruction in place Michelin will bring a soft and medium front and rear version of its rain tyres, which will be identified by a blue and no band respectively. There will be no intermediate tyres as these are no longer in the allocation for any race in 2017.

The Losail International Circuit was opened in 2004 and has been a regular on the MotoGP calendar since that season. It is still the only night race in MotoGP and an impressive number of floodlights bathe the track with enough lumens that not only give the riders the correct amount of light to make racing safe and exciting, but the directional beams are all designed to deflect light from the surface and cut glare.

Piero Taramasso – Manager of the Two-Wheel Motorsport Group:
“After all the hard work through the winter and the pre-season tests, it’s now time to get down to the competitive business of racing. Qatar is a unique event, with its own challenges, and we made a superb start to our return to MotoGP here last year, so we hope we can repeat those performances this time. The track can be very abrasive when the sand is blown on to the asphalt or very slippery when humidity rises, and this makes tyre choice a very important and demanding decision. This is the first time we will have the official choice of three front and rear slicks, so we will have the correct compounds for whatever condition the circuit is in. This race will also signal the first time that we have brought wet tyres to Qatar. It is hoped that if it does rain the riders will test conditions using the tyres we have available and see if it is safe to race. There has never been a wet race at Losail, so if it does rain and the riders agree to race, it could be an amazing spectacle under the lights.”